The store's launch follows the payment app being temporarily removed from the Google Play Store on September 18 for violating developer guidelines on real-money gaming.

Although removing the app may be a trigger, Paytm's decision may be the direct result of Google forcing developers listed on its Play Store to use its billing service. Google levies a 30% commission for any transaction of a digital product or service through its in-app billing system.

Paytm said the widget store will help developers bring their products to the masses and will provide a list of these applets and distribute them within their application. Rival PhonePe launched its in-app platform in June 2018 and changed its name to PhonePe Switch in October 2019. 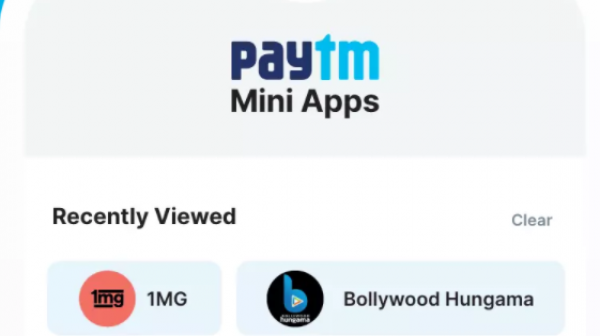 Last week, startup founders like Paytm's Vijay Shekhar Sharma and Razorpay's Harshil Mathur, along with 50 other founders, discussed the possibility of building an Indian app store to challenge Google.

In a separate move, the Internet and Mobile Association of India (Iamai), which includes various startups as members, has sought a collective strategy to tackle this problem. In a note dated September 29, Iamai said he seeks a meeting with the founding members to understand and resolve their concerns.

Said Vishwas Patel, Founder of CCAvenue, Chairman of the Board of Payments of India and member of Iamai. "Google's position in court is that it does not need an RBI license because it is not a payment system operator, and here, Indian applications must only use Google's payment and billing systems. They do not exercise their dominant position, but that provides a level playing field for all. "

"India needs a local app store in the long term, otherwise the 30% tax will eat up most businesses," Mathur of Razorpay said on Twitter last week.

Patil, the founder of the Indian Payments Board, said on September 29 that Google "cannot force Indian developers to use Google invoices and charge a commission for them."

The government is said to be planning to make the Mobile Seva App Store mandatory on all smartphones. Paytm recently appeared in the store, which mostly has government apps.

Experts said that in the absence of any legal means, the government will stop working to find a viable alternative to Google and Apple.

"Other app stores have not been able to catch up with Google Play because they lack network effects. The Google Play Store is required to take advantage of Google's mobile services, which include other apps like Google Maps," said Manjunath Bhat, senior analyst at Gartner, to Business2Business last week.

On September 29, Google said: "Distributed Play applications must use Google Play's revenue sharing and billing system as a payment method if they require or accept payments to access features or services, including any application functionality, digital content or goods. This applies. App-only, and purportedly to prevent revenue leakage to Google from Google Play as of January 2021. ''

Also Read: How much returns should your investments generate if you want to double your money?