ISRO's Chandrayaan 2 Landing: The Orbiter and Vikram lander were successfully separated. The next big move in the lunar journey will be soft landing on the lunar surface on September 7. 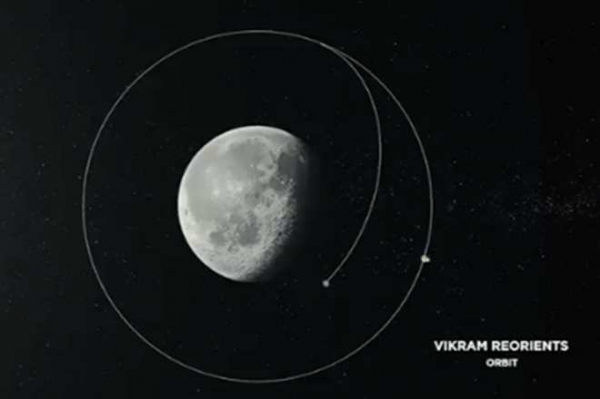 Counting that ISRO has completed one of the most important operations in Chandrayaan 2, there is anticipation and enthusiasm about the upcoming Chandrayaan movement as the landing date approaches. The Indian Space Research Organization (ISRO) said on Monday it had successfully carried out the separation of the Vikram Lander and Orbiter units from the lunar spacecraft. The agency is now preparing for the final landing of the Vikram Lander on the moon scheduled for September 7. Before the final landing procedure, the ISRO spacecraft unit will undergo heavy manoeuvres. The Bengaluru-based space agency reported that "all the composite parameters are normal after the Chandrayaan 2 manoeuvre. On Monday. Two different units of the ISRO lunar probe are currently in the moon's orbit to meet with the Earth's natural satellites."

The Lander "Vikram" unit was successfully separated from the Chandrayaan-2 Orbiter unit on Monday, September 2 at 1:25 pm IST. However, the orbit remained in a circular orbit around the moon. However, Vikram Lander will undergo deorbit manoeuvres to prepare for landing in the Antarctic region of the moon. The next two exercises are scheduled for the Vikram landing unit on 3 and 4 September.

While preparing for the next steps in the Chandrayaan-2 mission lunar mission, ISRO stated: “After Lander's separation on Monday, two extravagant manoeuvres are scheduled for 3 and 4 September. The second clearance is between 0300 and 0400 EST after these two important manoeuvres, the automated lineage phase will begin on September 7 between 0130 and 0230 EST.

ISRO provided detailed information on the critical separation process on its website. ISRO stated: 'Vikram Lander was successfully separated from the Orbiter Chandrayaan orbit at 13:15 EST on Monday, September 2, 2019. Vikram Lander is currently located in a 119 km x 127 km orbit. The various health-related parameters of the Orbiter and Lander vehicle are continuously monitored from the Mission Operations Complex of the ISRO Telemetry, Monitoring and Command Network in Bengaluru with the support of India's deep space network antennas in Bylalu, near Bengaluru, all Chandrayaan 2 Orbiter systems. The next exercise is scheduled for Tuesday, September 3, 2019, between 0845 and 0945 hours T. IST. "

Chandrayaan 2's lunar landing will be followed by the procedure of the Pragyan spacecraft, which will leave Lander 'Vikram' between 0530 and 0630 EST on 7 September. Lander and Rover will continue to conduct experiments on the moon. For one lunar day, equivalent to 14 Earth days.

Orbit will continue its mission for a year using eight scientific charges it carries. It will continue to map the surface of the moon and study the outer shell (outer moon) of the moon. On the other hand, the Vikram landing unit, which carries three scientific charges, will conduct surface and subsurface scientific experiments. Rover, Pragyan, carries two payloads to improve understanding of the Moon's Antarctic Moon. Chandrayaan 1 has already suggested the presence of water in the above moon area.