To connect more and more peoples from banking services. That aims to expand affordable access to financial services such as bank accounts, remittances, credit, insurance, and pensions. Run by the Department of Financial Services, Ministry of Finance, under this scheme 15 million bank accounts were opened on inauguration day The Guinness Book of World Records recognized this achievement, stating: "The most bank accounts opened in one week as a part of the financial inclusion campaign is 18,096,130 and was achieved by the Government of India from August 23 to 29, 2014".

Make in India Programme was launched by PM Modi on 25 September 2014 to encourage companies to manufacture their products in India. The basic objective of this plan was to increase the share of the manufacturing sector in the Indian GDP.

Swachh Bharat Mission (SBM), Swachh Bharat Abhiyan (SBA), or Clean India Mission is a country-wide campaign initiated by the Government of India in 2014 to eliminate open defecation and improve solid waste management (SWM). Phase 1 of the mission lasted till October 2019. Phase 2 will be implemented between 2020-21 and 2024-25.

Initiated by the Government of India, the mission aimed to achieve an "open-defecation free" (ODF) India by 2 October 2019, the 150th anniversary of the birth of Mahatma Gandhi. 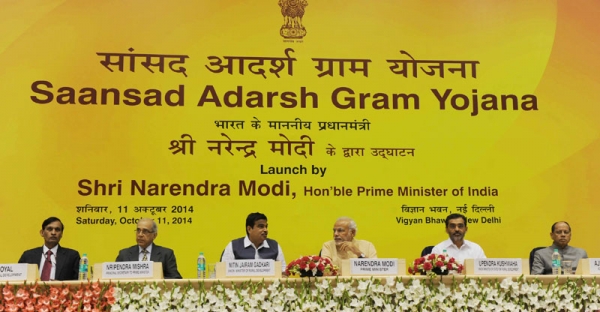 Key objectives of the Yojana include:

Prime Minister Narendra Modi launched the PanditDeendayalUpadhyayShramevJayate scheme, under which he dedicated a ShramSuvidha portal, Labour Inspection scheme, and Portability through Universal Account Number (UAN) for Employees Provident Fund (EPF) to the nation. 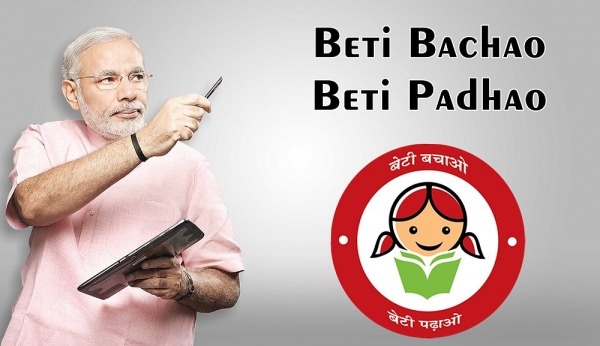 BetiBachaoBetiPadhao aims to generate awareness and improve the efficiency of welfare services intended for girls in India. The scheme was launched with initial funding of â‚¹100 Crore. It mainly targets the clusters in Uttar Pradesh, Haryana, Uttarakhand, Punjab, Bihar, and Delhi. 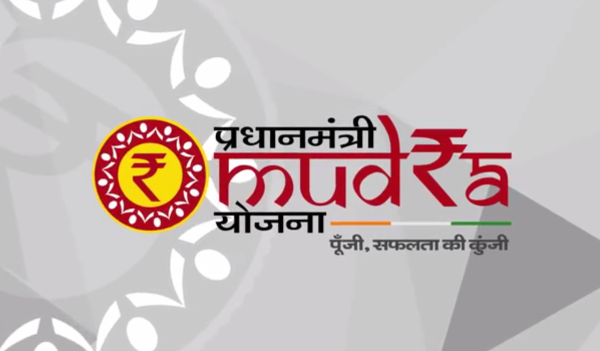 Prime Minister Narendra Modi started Prime Minister Mudra Yojana (PMMY) on April 8, 2015. The prime motive of this scheme is to promote self-employment opportunities and manufacturing activities in the country. Under the Mudra Yojana, a huge loan of Rs.2.46 lakh crore disbursed to 480 million people in the financial year 2017-18.

PradhanMantriUjjwalaYojana (PMUY) Prime Minister's Lighting Scheme) was launched by Prime Minister of India Narendra Modi on 1 May 2015 to distribute 50 million LPG connections to women of Below Poverty Line (BPL) families. A budgetary allocation of â‚¹80 billion (US$1.1 billion) was made for the scheme.

Atal Pension Yojana (APY), formerly known as SwavalambanYojana (SY) is a government-backed pension scheme in India, primarily targeted at the unorganized sector. It was mentioned in the 2015 Budget speech by the then Finance Minister Arun Jaitley. It was launched by Prime Minister Narendra Modi on 9 May in Kolkata.

Pradhan Mantri Jeevan Jyoti BimaYojana is available to people between 18 and 50 years of age with bank accounts. It has an annual premium of â‚¹330. The GST is exempted on Pradhan Mantri Jeevan Jyoti Bima Yojana. The amount will be automatically debited from the account. In case of death due to any cause, the payment to the nominee will be â‚¹2 lakh 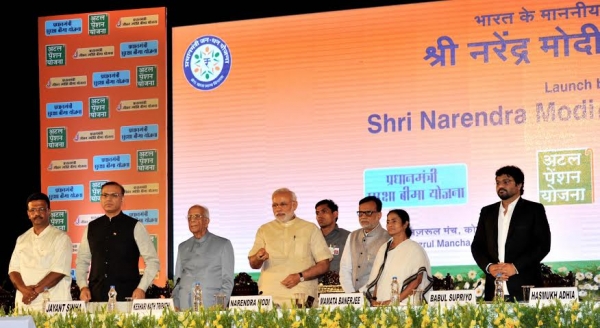 PradhanMantriSurakshaBimaYojana is available to people (Indian Resident or NRI) between 18 and 70 years of age with bank accounts. It has an annual premium of â‚¹12 exclusives of taxes. The GST is exempted on PradhanMantriSurakshaBimaYojana. The amount is automatically debited from the account. This insurance scheme can have one year cover from 1 June to 31 May and would be offered through banks and administered through public sector general insurance companies.

The Smart Cities Mission (SCM) is a holistic city program to build 100 cities in India. It was launched on June 25, 2015 by Prime Minister Narendra Modi. The prime objective of this Smart Cities Mission is to promote cities to upgrade infrastructure and provide better basic facilities to the citizens of the country.

This scheme was developed by the government of India for providing all the basic amenities in more than 500 cities which have more than one lakh population.

Digital India is a campaign launched by the Government of India in order to ensure the Government's services are made available to citizens electronically by improved online infrastructure and by increasing Internet connectivity or making the country digitally empowered in the field of technology. Digital India consists of three core components: the development of secure and stable digital infrastructure, delivering government services digitally, and universal digital literacy.

Gold Monetization Scheme (GMS) refers to a process wherein a depositor deposits gold (say jewellery, coin, etc.) with a bank which is then lent by the bank to its borrowers (say jewellery makers), after melting into gold bars. This is akin to a normal banking operation (like a savings bank account) but carried out in terms of gold instead of in rupee.

To check the real demand for Gold, the Government introduced the Sovereign Gold Bond Scheme in 2015.

Ujjwal DISCOM Assurance Yojana (UDAY) is the financial turnaround and revival package for electricity distribution companies of India (DISCOMs) initiated by the Government of India with the intent to find a permanent solution to the financial mess that the power distribution is in.It allows state governments, which own the DISCOMs, to take over 75% of their debt as of September 30, 2015, and pay back lenders by selling bonds.

The Government of India is launching the Start-up India," movement on January 16th, 2016 in New Delhi. The event is aimed at celebrating the entrepreneurship spirit of the country’s youth and will be attended by CEOs and founders of top Startups (over 1500) from across the country.

This scheme was introduced by the government of India to focus on the Construction of the Over and Under Bridge to make National Highways Railway Crossing free.

This scheme aims to help new businesses financially by providing Loans up to 10 lakhs to 1 crore for the establishment of new companies to Scheduled Castes / Tribes and Women Entrepreneurs in India.

PM NarendraModi on 14 April 2016 launched 'Gram Uday Se Bharat Uday Abhiyan' at Mhow, Madhya Pradesh. The Abhiyan (campaign) was launched on the 125th birth anniversary of Babasaheb Ambedkar at his birthplace to strengthen Panchayati Raj in villages and ensure social harmony in villages.

PradhanMantriUjjwalaYojana (PMUY) is the Scheme for providing LPG connections to the women belonging to the Below Poverty Line (BPL) families. The scheme has been implemented by the Ministry of Petroleum and Natural Gas.

The Union Finance Minister ArunJaitely announced an integrated Ganges development project titled 'NamamiGange' (meaning 'Obeisance to the Ganges river') and allocated â‚¹2,037 Crore for this purpose. The objectives were effective abatement of pollution, conservation, and rejuvenation of the Ganges. Under the project, 8 states are covered.

Since the NDA government came to power, there has been an avalanche of government schemes. I am optimistic that the positive results of these plans will be visible to all in the near future.