RIL to merge Den, Hathway and TV18 Broadcast with Network18

Mukesh Ambani's Reliance Industries Ltd (RIL) is trying to take an amazing opportunity to scale up their business and take on its rivals.  Reliance Industries Ltd (RIL) has announced the new merger of its media and distribution businesses that have been spread around several entities into the Network18. With some of the listed companies that include the Zee Entertainment Enterprises Ltd and Sun TV Network that are RIL's competitors,  the company could enhance to become an integrated media and entertainment company with total revenue of â‚¹80 billion. It could emerge as one of the largest media companies in India following the Star network with a total revenue of Rs. 120 billion.

Under the Arrangement which has been finally approved on Monday, 17th February 2020, TV18 Broadcast, Hathway Cable and the Datacom and Den Networks will be merged into Network18 Media and Investments. The broadcasting business of the company will be joined in the Network18 and the cable and ISP (internet service provider) businesses will be joined in two separate wholly-owned subsidiaries of the Network18. 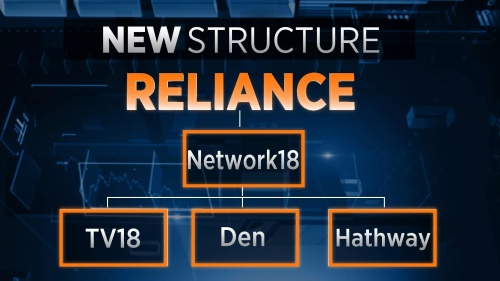 Mr. Karan Taurani, the research analyst at Elara Capital Ltd. said in a statement that, “This is a huge consolidation move that will help to improve RIL's bargaining power  most importantly with respect to the television channels that are going to receive wide distribution." He further added, there are benefits of scale and the size to the company that will become quite evident in the coming six to twelve months. As per the company's statement, Network18 and its affiliates will have a total of 13 percent share of the TV viewership in India with a total of 56 channels including news and entertainment channels across 15 different languages. It will also have a total of 12.5 percent share of the cable and satellite pay-subscriber base of India as well as a 6.7 percent share of the wireline broadband subscriber base of India.

Mr. Abneesh Roy, the senior vice-president (research) at Edelweiss Securities said in a statement that one large entity as compared with four small entities will be much more attractive to the investors. He added, “This will end up simplifying the corporate structure of the whole group by cutting the number of listed entities from four to one in the media Industry. At the consolidated level, Network18 will be completely net-debt free hence providing a solid base for the growth and the improved returns of the shareholders."

Ahead of this, the consolidation of the cable businesses of Den and Hathway into a single entity will leverage its combined strength of the 27,000 LCO (local cable operators) partners who will be acting as the touchpoints to about 15 million households in the country and more than one million broadband subscribers.

The Merger will result in better cash flow management within the combined entity. The entertainment ventures will be generating a free cash flow that could be utilized by the distribution businesses of the company.

On one hand, Mr. Roy had said that the disclosure levels need to be higher, given the diverse media businesses in a single listed entity, and on the other hand Mr. Taurani said that one of the challenges could be LCOs who may resist the consolidated power of a single broadcast network when issues such as the new tariff order (NTO) arise.

The total Amendments that have been brought to the NTO by the Telecom Regulatory Authority of India (TRAI) at the start of this year are being contested in the court by the television broadcasters. An issue that may arise is that the distribution platform owners, as well as the cable operators, will only be able to charge not more than â‚¹160 for the channels that should be free.