On the occasion of the 23rd Kargil Vijay Diwas, Prime Minister Narendra Modi on Tuesday paid tribute to the Indian soldiers who lost their lives during the Kargil War fought between India and Pakistan in 1999. On this day, the Indian Army turned victorious with Operation Vijay, carried out to recapture the occupied Tiger Hill in the Kargil district of Jammu and Kashmir.


The Prime Minister described the day as a "symbol of pride and glory" for India, saluting the soldiers "who have reached the pinnacle of valor in defending the motherland". 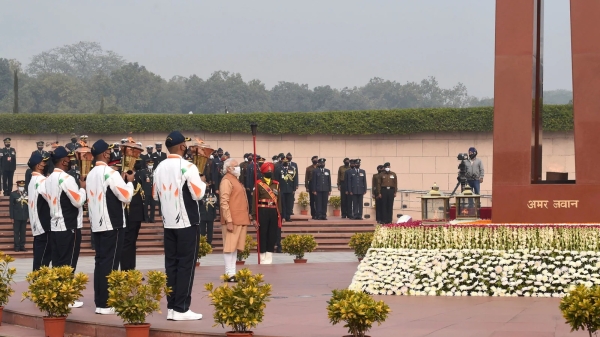 President Draupadi Mormo marked the day on Twitter, saying: "I bow to all the brave soldiers who laid down their lives to protect Mother India. All the countrymen will forever be indebted to him and his family. Jai Hind!"

Expressing his respect for the soldiers, Defense Minister Rajnath Singh said: "They bravely fought under extremely harsh conditions to defend our homeland. Their valiant work and indomitable spirit will forever be etched as a defining moment in the history of the India".

The Kargil War, also known as Operation Vijay, was fought at an altitude of around 16,000 feet, in which 1,042 Pakistani soldiers were killed and 527 Indian soldiers lost their lives.

Amazon Prime Day Sale 2022: It is all about raining Discounts