North Korea said on Thursday that it has successfully launched a hypersonic missile as part of efforts to modernize its strategic weapons systems, days after leader Kim Jong Un vowed to bolster his military despite difficulties related to the pandemic.

Wednesday's launch, North Korea's first known weapons test in nearly two months, suggests the country will press ahead with its plans to build powerful and sophisticated missiles rather than returning to disarmament talks anytime soon.

Korea's official Central News Agency said the Central Committee of the ruling Workers' Party expressed "great satisfaction" with the results of the missile test, which was monitored by leading weapons officials.

It is the second known flight test of a hypersonic missile since North Korea first tested such a weapon last September. It was not immediately known whether the two were the exact same type of hypersonic missile.

"The successive successes of test launches in the hypersonic missile sector are of strategic importance because they accelerate the task of modernizing the country's strategic armed force," a KCNA dispatch said. The word "strategic" implies that the missile is being developed to deliver nuclear weapons. 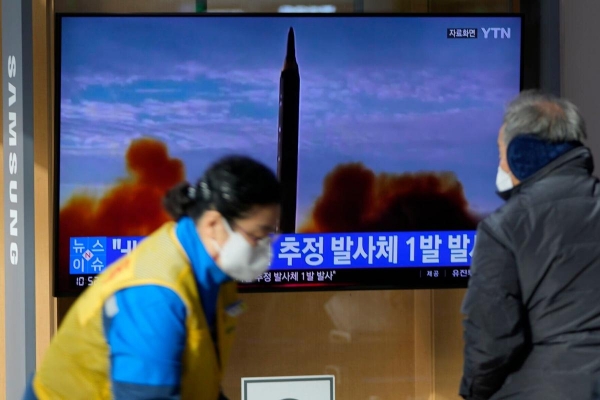 Hypersonic weapons, which fly at speeds in excess of Mach 5, or five times the speed of sound, could pose critical challenges to missile defense systems due to their speed and maneuverability. It's unclear when and if North Korea will be able to make a high-tech missile, but it was among the wish list of advanced military assets that Kim revealed early last year, along with a multi-warhead missile, solid-fueled long-range missiles, spy satellites, solid-fueled long-range missiles and launched nuclear missiles.

North Korea's latest launch was first detected by its neighbors. The US military described it as a ballistic missile launch that "highlights the destabilizing impact of (North Korea's) illicit weapons program." South Korea and Japan expressed concern or regret over the launch. United Nations Secretary General Antonio Guterres reiterated that North Korea should resume talks with other countries.

US-led diplomacy over North Korea's nuclear program has stalled since 2019 due to disagreements over international sanctions on North Korea. The Biden administration has repeatedly called for the resumption of nuclear diplomacy "anywhere, anytime" without preconditions, but North Korea has argued that the United States must first withdraw its hostility before resuming talks.

During last week’s plenary meeting of the Central Committee of the ruling Workers’ Party, Kim repeated his vow to expand his country’s military capabilities without publicly presenting any new positions on Washington and Seoul.

The North’s advancing nuclear arsenal is the core of Kim’s rule, and he’s called it “a powerful treasured sword" that thwarts potential U.S. aggressions. During his 10-year rule, he’s conducted an unusually large number of weapons tests to acquire an ability to launch nuclear strikes on the American mainland. But his country’s economy has been faltering severely in the past two years due to the COVID-19 pandemic, the sanctions and his government’s own mismanagement.