Delhi-Mumbai Expressway: Construction has begun on a 497 km stretch of the 1,261 km project, which is expected to be completed in 2023-24 and will reduce travel time between the two cities by 11 hours.

Delhi-Mumbai Highway: Continuous progress is being made on the  Rs 1-trillion Delhi-Mumbai Expressway project (1,261 km), with work starting at 497 km stretch, likely to start soon at another 162 km awarded and 569 km of length being under the bidding process. The eight-lane expressway, which is being built under the EPC highway, will reduce the distance between the two cities by more than 150 km and reduce travel time to 13 hours from 24 hours to date. 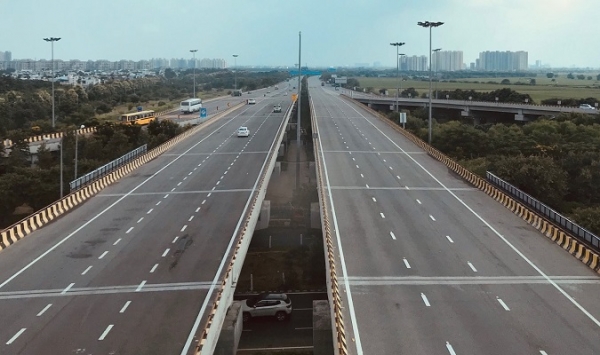 Probably ready by 2023-24, the project was necessary due to heavy congestion at the Delhi and Mumbai National Pass along the NH-48 of the Golden Quadrilateral. The six-lane lane, which is a critical component of the country's highway network, has an average traffic of around 80,000 passenger car units (PCUs), a figure that is expected to increase to about 100,000 PCUs soon. Worse still, the corridor expansion presents more logistical challenges.

Credit Suisse Brokerage said in its June report: "This is the first time that the National Highway Authority of India (NHAI) has been lining up the green field for such a major project. It has been found to be cheaper and faster based on a lower cost of land acquisition and lesser burden of shifting utilities and rehabilitation of people living along the corridor.”

Passing through Haryana, Rajasthan, Madhya Pradesh, Gujarat and Maharashtra, the Delhi-Mumbai highway will also provide an easier connection to the cities of Jaipur, Kuta, Chiturgarh, Indore, Eugene, Bhopal, Ahmedabad, and Vadodara. "The decrease in distance and time is expected to have significant economic benefits. Reducing the distance will lead to an 8-9% reduction in logistics costs in the corridor, and will save around Rs 100,000 crore for the economy during its useful life. " Reducing distance, time, and fuel consumption will also reduce foreign exchange spending since a large part of the crude requirements are imported the Ministry of Road Transport and Highways (MoRTH) has said.

The corridor could control access with closed tolling. A network of 75 amenities has planned on both sides of the expressway at 50-km intervals. The government is provisioning a range of 8 lanes that will be expanded to 12 lanes in the future, with a design speed of 120 km / h.

MoRTH has estimated that approximately 320 million liters of fuel will be saved annually due to less compatibility between the two cities. Assuming per litre CO2 emission of 2.68 kg, this would mean a reduction of 857 million kg of CO2 emissions every year. In comparison, more than 40 million trees will be needed to absorb these emissions: with an average density of 80 trees per acre, the equivalent forest cover reaches around 200,000 hectares.

The Delhi-Mumbai Expressway was built as part of the first phase of Bharatmala Pariyojana, which proposes to build 34,800 km of national roads over a period of five years from 2017, at an estimated cost of Rs 5,35,000 crore. However, analysts said the first stage would be delayed by at least two years, with the rating agency ICRA's contract to be completed by 2025-26. Bharatmala Pariyojana is designed to improve the efficiency of freight and passenger traffic across the country by bridging critical infrastructure gaps.