MedPlus Health IPO opens for subscription: Does the pharma retailer have a pill for profit?

Medplus Health is the second-largest pharmacy retailer in India, with a multi-channel platform. It will sell its shares in the range of Rs 780-796 per share.

The pharmacy retailer will issue new shares worth Rs 600 crore, while shareholders and promoters will offload equity shares worth Rs 798.30 crore. Investors can bid for a minimum of 18 shares and then multiples of 18. The issue can be subscribed until Wednesday, December 15.

Despite aggressive pricing, the company has largely received a positive response from brokerages, thanks to its larger expansion plans and higher growth expectations.

Medplus, with its clustered store presence, was well prepared to leverage an omnichannel platform with a hyperlocal delivery model. "At the upper price band, it is valued at approximately 43.9x EV / EBITDA and 3.1x EV / sales for FY21. We assign a subscribe rating given its unique model and decent valuation," it added.

The company is predominantly a brick-and-mortar retail pharmacy with a relatively smaller omnichannel presence.

"The company has a very strong asset turnover with a focus on further improving its profitability, so the IPO valuation appears to be cheaper compared to its peers," said KR Choksey, who recommended subscribing to the IPO.

Incorporated in 2006, Medplus offers a wide range of products, including pharmaceuticals, wellness and consumer goods, such as household and personal care products. 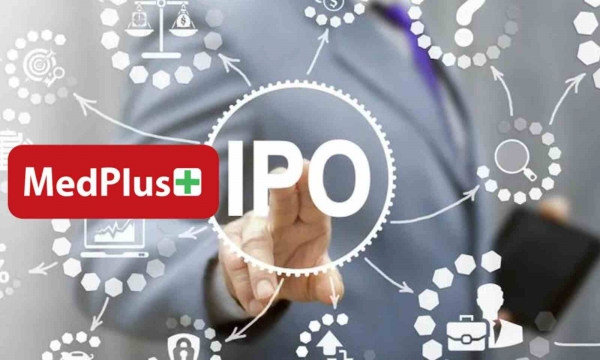 At issue price, MedPlus would trade at 3.1x FY21 P/S & 40x FY21 EV/EBITDA, said Aditya Birla Capital, which has suggested investors with a high risk appetite to subscribe to the issue. "With the opportunities in MedPlus business sectors and the gradual shift from the unregulated to the regulated sector, we believe that in the short term MedPlus will be evaluated more on long-term growth potential and less on existing finances."

Brokerage firm Prabhudas Lilladher gave a subscribe rating to the issue, as it said Medplus would gain scale and profitability due to the store's speed of expansion and the benefits of the economic scale and faster break-even point. "We believe Medplus will trade at a higher multiplier because it is a multi-channel business that only operates, with a scarcity premium and high growth rates," she added. "Medplus EBITDA grew at a rate of 48% on a compound annual basis during the 2019-22 fiscal year."

The company had shares of Rs 5 crore for eligible employees at a discount of Rs 78 each from the final offering price. It reserved 50 percent of the net issuance to eligible institutional bidders, while high-income investors would receive 15 percent. The remaining 35 percent is for retail bidders.

The IPO had an EV / EBITDA price of 27.5 times and a sell price of 2.5 times the upper price range of the IPO, Angel Broking said. It has suggested getting involved bearing in mind that the company's multi-channel platform would help drive strong growth.

Pharmacy retail is the fastest growing segment of the general retail space with an expected growth rate of 25 percent during fiscal 20-25, according to a Technopack report, which is positive for players like MedPlus.

In the upper price range, the stock is valued at 3.09x, in post-issue stockholders' equity and in fiscal year 21 financial statements.

In FY21, MedPlus enjoyed a 22 percent market share and posted compound annual revenue growth of 16 percent during fiscal year 2019-21 and a gross margin of 21 percent and 21.3 percent in fiscal year 21 and the first half of fiscal year 22, according to BP Equities. "The company has a strong financial performance and plans to strengthen its market position by increasing store penetration in existing clusters and developing new collections," he added, with a long-term underwriting rating.

The company will use the proceeds from the new issue to meet the working capital requirements of the physical subsidiary Optival Health Solutions.

Swastika Investmart said in a pre-IPO note that after the poor performance of fiscal 2020, the company has posted good earnings recently. He added that there is an opportunity for growth in the industry and that the performance of the company may be better over a period of time.

"Prima facie, the valuation seems expensive, but over the period, we believe that the growth of the company may justify its valuation," he added, qualifying for underwriting to include long-term and long-term earnings.

Dalal & Broacha Stock Broking also recommended subscription to the version, due to its attractive price.

Religare Broking said: “The company has a wide range of operations and offers competitive rates to its clients that will continue to increase its market share. On the financial front, the company's performance looks decent. " He added that the company plans to improve its market access by entering new geographies, which gives a positive outlook on the issue.