Every soul has a wish to fly and great thanks to the aviation industries that have given human beings wings to fly and save time too. But these days the biggest news of Jet Airways has shattered a million dreams. The Jet Airways news came into flash on 26 Feb 2020, which has created lots of thoughts that are hovering over our minds, but the most kindle thought of Jet Airways news is that on 25th Feb the Committee of Creditors COC meeting of Jet airways has passed another resolution and they are seeking fresh Expression of Interest (EOI). The Jet airways news came up with the findings that their lenders are seeking fresh Expression of Interest (EOI) for their carrier. 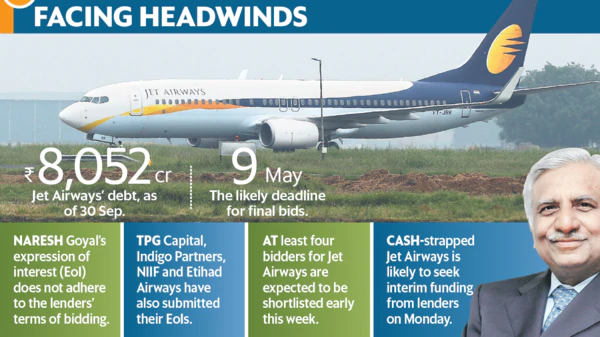 In April 2019, Jet Airways was grounded, owes more than 8,000 crores from the banks, with those having a greater significance for the public sector. Earlier the last bidding date was 18 Feb 2020.

But the twist and turn came when the e-voting was concluded on 25 Feb 2020, the COC passed the resolution and the Jet airways news was flashed across the countries that they are seeking fresh invitations of EOI for corporate debtors.

Another segment added to the Jet Airways News was that the COC has also extended the date of submission of resolutions plan from Feb 18, 2020, to 9 March 2020.

The decision for fresh bids according to the Jet airways News seems to take on the grounded basis of the meetings. According to the sources a team from Russia's Far East Asia Development Fund along with Enso Group met the Committee of Creditors (CoC) earlier in Feb and they expressed their interest in Jet Airways and this was the formulated in the shape of fresh bidding invitations and became the latest flash of Jet Airways news.

According to the LinkedIn profile, Far East Asia Development Fund is a state finance development institution which came into existence in 2011, and it warrants a flexible approach to projects' structuring and financing. According to the websites, the ENSO group with its headquarters in Mumbai has been roped in by the fund to find an Indian partner., which will first find a consortium and then it will be converted into the formal bid.

The Jet airways news also added that the ENSO group has an interest in several sectors including metal mining, health care, infrastructure and oil, and gas too. The Jet airways news of fresh biding, flashed when the South American conglomerate Synergy Group and New Delhi-based Prudent ARC failed to meet the deadline of resolution submission.

In December 2019, the UK-based Hinduja Group yet again expressed interest to buy Jet airways. The Jet airways were declared insolvent on June 20, 2019. The airline has 12 aircraft, including three Boeing 737s, six Boeing 777s, and three Airbus A330s (including one leased to Air Serbia). Of them, the three Boeing 737s are fully-owned by the airline. There is a pending loan of around Rs 250 crore on the remaining planes.

The KLM will buy the Boeing aircraft which was seized in Amsterdam last April (2019), along with catering and data equipment too.

So all say that time and fate both are powerful tools to handle the hurdles, let’s wait for 9th March 2020 and see what would be another flash of Jet Airways news, whether to be grounded and sealed or revived again.