Reliance e-commerce gears up to challenge Amazon, Flipkart in 2020 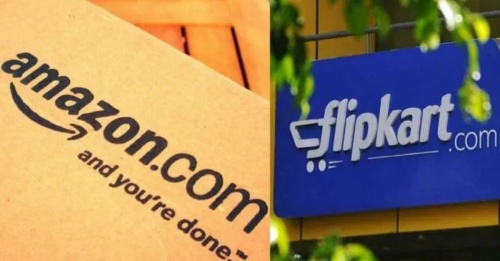 New Delhi: With more and more Indians taking the road online to meet their purchasing needs, e-retailers like Amazon and Flipkart face huge demands, even from remote areas, but there is a general slowdown and negative sentiment, along with industry experts say the new e-commerce policy and Reliance potentially entering to e-commerce space may soon spoil the 2020 party leaders market.

The last part of 2019 was not so bad for Amazon and Flipkart, as vacation sales made record returns for both companies.

Online retail sales in India recorded sales of $3 billion (Rs. 19,000 crore) of Gross Merchandise Value (GMV) between September 29 and October 4, according to market research firm RedSeer Consulting based in Bengaluru. The combined sales of Flipkart and Amazon accounted for 90% of the market share.

A report issued by Forrester Research predicted that electronic retailers' sales would reach about $ 4.8 billion during the holiday season in general.

Despite regulatory hurdles in early 2019, Cloudtail India, the largest seller on Amazon India, announced revenue growth of 25% over the March quarter of 2019.

According to Satish Mina, Chief Analyst at Forrester, the initial months of 2019 were hit hard by concerns over the new regulation.

"There was a general slowdown amid negative sentiments in the e-commerce sector. Sales rebounded during the holiday season, but overall, it wasn't a great year and there will be a drop in the percentage of growth expectations in 2019 for the Indian e-commerce industry," Meena told IANS.

"Profitability remains a concern for the big players. There has been investment in certain new classes, but nothing much has changed this year."

Reliance's potential entry into e-commerce space by Diwali next year will bring enormous competition to Amazon and Flipkart.

“The discount-based approach mastered by Reliance has been reflected in which vertical they put their money in. They will probably enter into e-commerce with the high-potential grocery sector near Diwali next year or maybe later.” Meena said, “The schedule is still a concern, but they are coming big. "

Reliance Retail joining the online retail sector is the biggest challenge facing Amazon and Walmart-Flipkart, as the giant led by Mukesh Ambani is well placed to create massive market turmoil.

Reliance Retail operates 10,415 stores in more than 6,600 cities and towns, with 500 feet per year, giving the company the kind of scope needed to start operations in India quickly.

Reliance Retail has already launched its food and grocery application for its pilot test among its employees.

According to the Indian Brand Equity Foundation (IBEF), the Indian e-commerce market is expected to grow to $ 200 billion by 2026, driven by the increased penetration of smartphones, the launch of 4G networks and the increase in consumer wealth.

The country's ongoing digital transformation is expected to increase from total Internet users in India to 829 million by 2021.

Another major concern for Amazon and Flipkart is the new e-commerce policy which is still in the consultation stage. India questioned Amazon's "predatory prices" and "deep discounts."

Prabhu Ram, Director of the Industry Intelligence Group (IIG), said: “Next year, it remains to be seen what would be the new e-commerce policy based on the recommendations of many industry stakeholders.”

The grocery sector is a major growth area in 2020.

“We have seen players like Grofers (supported by SoftBank, Tiger Global, and Sequoia Capital) participate in this sector. Social commerce will be another major area for growth in 2020. Facebook has also made investments in Meesho, a platform that allows Indian entrepreneurs to establish online businesses via social channels Meena said."

"The ability of current and future players in the field of e-commerce will be greatly tested in 2020," he added.